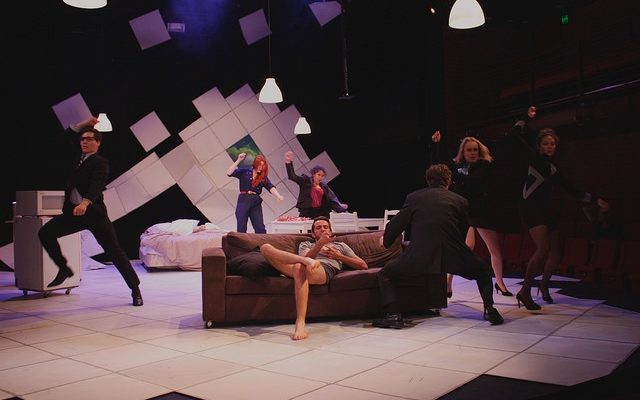 ‘Realism’ is an imaginative and absurdist ‘kitchen sink’ play by the Edinburgh-born playwright, Anthony Neilson. After being thrown out of Music and Drama College, Neilson went on to win a BBC play writing competition. He wrote this delirious, ‘in-yer-face theatre’ tragi-comedy in 2006, at the age of 39; it is certainly a play, the like of which you will have never seen before. With its R18+ hilarious crudity and MAJOR political incorrectness, it has a touch of the ‘Trainspotting’ atmosphere.

This laugh-a-minute play is a WAAPA, third year acting students’ production. The 100-minute performance is showing nightly at 7.30 in the Roundhouse Theatre, Edith Cowan University, 2 Bradford Street, Mount Lawley until the 19th June.

The scene is an untidy student bedsit. The tiled floor rises up the back wall, where it peels open to show a small amount of sky and the bedroom alcove beyond. There is an old settee, a basic table and two chairs and in the corner an old fridge and top loading washing machine. All the furniture has castors on to allow them to move freely around the room. (Set designer Sarah Duyvestyn, assisted by Tyler Hill and Nicola Stratman)

It is Saturday morning, Liam (Liam Maguire) is woken from his slumbers by Alfie (Alexander Frank) who asks what he is going to do today, the reply being ‘F*** all’. It becomes clear that Alfie is in fact Liam’s alter ego, or interlocutor, telling him what to do and commenting on Liam’s every banal thought. Liam’s lazy day becomes very busy as his brain runs wild with daydreams, intimate memories from the past, all blended with his present routine and a brief insight of what may happen in the future.

As he staggers around in his underwear, he sees his whole squalid existence, in pandemonium, coming to life. Simple objects in the room set him off on another tangent of thoughts and emotions. Although the whole situation seems bizarre, very soon you find yourself being dragged into his world, recognising situations you too may have experienced as a youth, and that he is seeing from another angle now.

Liam watches TV and in his hazy drab mind, lives out the dramatic news from the Middle East and his favourite mystery series. When he is sorting out his house bills, we find ourselves whisked into an inappropriate, totally salacious song and dance routine, which is guaranteed to make even the most prudish person laugh aloud.

The telephone rings, and when it is yet another telephone company’s salesperson, your sympathies are immediately with Liam. However, minutes later you will either feel against him or embarrassed for him. Liam’s only real friend is Gallows (Adam Sollis) his amazing, larger-than-life, brusque cat. Often his mother (Alexis Lane) or father (Ben Kindon) will berate him – popping up in unusual places and at inconvenient times – trying hard to swing his attitude around to their pedantic straight and narrow lifestyle.

Liam’s love life is complicated, he loves young, blonde Laura (Harriet Davies) but it is the sophisticated, dark Kirsty (Kirsty Marillier) with whom his parents really want to see him to settle. As he thinks of his girlfriends, we are treated to his filthiest fantasies and his desires take flight.

This show demonstrates that even when one is poverty stricken and alone, the most isolated student can still have a great day. An experience, that because it is in his head, is outside the control of his relations and authorities.

The script was extremely demanding of the actors, taking them well outside their normal comfort zones; however, under the skilled guidance of director Anthony Skuse, the show moved along at a tremendous rate. The energy shown by the cast, who were all outstanding in their teamwork, was magnificent. They must have had a ball at rehearsals because the whole effect was so slick.

Harriet Davies had the most beautiful operatic voice as she sang to her lover, and the dance routine arranged by Alexandra Lane, Teressa Izzard and the director was most impressive.

Devon Lovelady’s lighting design (operated by Cameron Routley) was clever. The scenes changed rapidly from a war zone to stormy weather, and intimate scenes. Along with Joel Bickford’s sound design (operator Kyle Long), the overall effect was one of excitement and fun. Hannah Matternick-Jones’ costumes covered a huge range from a spectacular musical number to the tatty moggy, Gallows.

The stage manager’s assistants were Sarah Roberts and Stephanie Tchorzewski, in unison with the timbre of the play brought a smile as they appeared in navy boiler suits, unbuttoned to the waist, with scarlet half-cup bras peeping through. A clever idea as the standard black SM outfits would have clashed with the action and mood of the play. A mention must be given to the production manager, Emma Barbaro and stage managers Isabella Strada and Kaz Kadarmia who must have an outlandish cleaning job at the end of every show. But the mess was worth it.

This was an unusual show from beginning to end, unrestrained, uncouth perhaps, but completely enjoyable. The cast can be most proud of such a unique production that will remain in their minds forever.

Just a couple of these extraordinary performances left, certainly not to be missed. Smile and gasp in amazement days later.