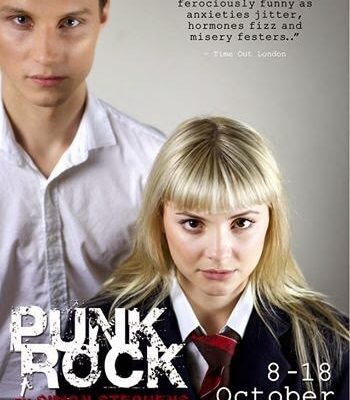 ‘Punk Rock’ premiered at the London’s ‘Royal Exchange Theatre’ in 2009. Although it has crude and inappropriate language throughout, it is still frequently chosen as a final year text for UK schools.

The Murdoch Theatre Company (MTC), in Studio 411 Theatre (off Car Park 4) at Murdoch University, South Street, Murdoch, is producing this drama, with music.

The one and a half hour performances (no interval) can be seen nightly at 7.30 until Saturday 30th April.

The scene is the second floor library of a fee-paying grammar school in working class Stockport, a southern suburb of Manchester. The set shows a large bay window with small leaded panes, and a box seat the length of the window. There are oak student lockers, tables and chairs, but the whole schoolroom has the appearance of decay and lack of funding. The designer of this quality set was Jessica Bennett-Hullin assisted by Ellie Hopwood. The set construction was by Michael Bennett-Hullin, Jessica Bennett-Hullin, William Burgess and Mathew Neale.

The school costumes were all handmade including skirts and trousers. There were specially designed school badges for the blouses and jackets, a huge amount of work, by Ellie Hopwood, Jessica Bennett-Hullin and Anna Weir.

The production manager, Claire Mosel, and her stage manager Grace Pusey have manged to pull this major production together beautifully.

Seated in the library, studying for his mock exams is teenager, William (Mike Casas), an intelligent pupil who tends to fantasise. When the new girl, Lilly (Paige Mews), who has just moved to the area from Cambridge enters the room, William is only too willing to help her settle in. The next to enter is the heartthrob of the class, Nicholas (Will Moriarty) who is more interested in the older women than students.

The pleasant conversation is soon broken by the arrival of the class bully, Bennett (Thomas Dimmick), who is crass with the girls as well as degrading with the boys. He creates conflict wherever he goes. Even his girlfriend Cissy (Bella Doyle) only tolerates him because of his perceived power. When Bennett abuses her friend Tanya (Shannen Precious), Cissy is too scared to support her despite Tanya’s obvious inner turmoil.

Almost unseen, the school genius, Chadwick Meade (Sean Wcislo) enters the library. As soon as he spots Bennett, he begins to tremble and stammer. Bennett loves to see him suffer by pointing out his sexual inadequacies.

It is not long before there is a tragedy at the school; will they ever be the same again?

I don’t normally quote paragraphs of dialogue from plays, but this drama has what is considered one of the best monologues in modern writing, when near the end, Chadwick Meade says:-

We could have made something really extraordinary and we won’t. We’ve been around one hundred thousand years. We’ll have died out before the next two hundred. You know what we’ve got to look forward to?

You know what will define the next two hundred years?

Thousands die every summer from floods in the Indian monsoon season.

Africans from Senegal wash up on the beaches of the Mediterranean and get looked after by guilty liberal holiday-makers.

Somalians wait in hostels in Malta or prison islands north of Australia.

Hundreds die of heat or fire every year in Paris. Or California. Or Athens.

So if you think I’m worried by you calling me names, Bennet, you little, little boy, you are fucking kidding yourself’.

On arrival at the theatre, a clue as to the play content is given by the front of house, St Trinians schoolgirls Kiah Van Vlijmen, Claire Mosel and Rhiannon Moon. In the theatre a feature punk duet, Michael Bennett-Hullin and William Burgess, belted out the preshow music. They also filled in briefly between the scenes.

The magnificent director was Tay Broadley, who along with his co-director Justin Crossley and assistant Katie Southwell, have given us a drama to remember. The choice of cast was perfect. Each actor completely understood and captured the depth of their character’s strengths and weaknesses. The team had impeccable chemistry and timing. Tay has cleverly decided on the slow, underplayed delivery for most of the play, only turning up the drama at specific harrowing points. This took the audience’s breath away several times.

When the play finished there was silence before a half-hearted applause began. I just want the actors to know that this did not reflect the audience’s full appreciation, only that they were stunned and drained – such was the power of the acting. When the cast left the stage, again the audience sat numb. It was clear that a few tears had been cast.

This is one of the most powerful and challenging plays that I have seen in years. Everyone concerned should be extremely proud of their success.