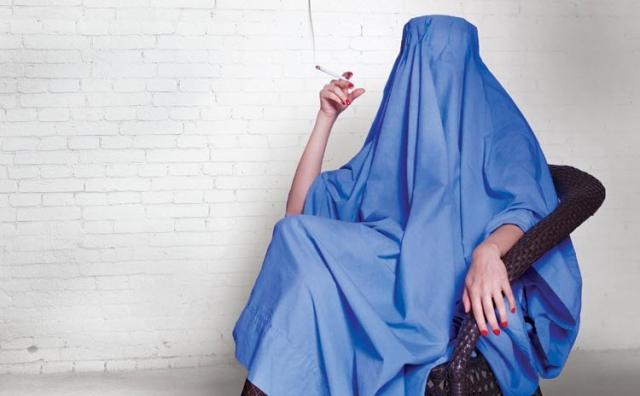 ‘Once We Were Kings’ is a richly and lyrically written, adult play (12+) that explores being a young queer in a Muslim country. The play took Pakistani playwright, Dure Rey Khan-Yousafzai over 7 years to complete. Dure is a poet, writer and multidisciplinary artist. Creative writer Marziya Mohammedali assisted her with the script, and Alex Kannis helped with the editing.

This 55-minute presentation by The Blue Room Theatre and the dynamic WA group, ‘Third Culture Kids’ – led by Mustafa Al Mahdi and Tanya Dharmapala – can be seen at the Blue Room’s Main Theatre, 53 James Street, Northbridge each evening at 7.00, Tuesday until Saturday. The season runs until Friday 29th May.

Muslim artists, who have lived in the Middle East, have produced the fascinating art exhibition that accompanies this show. Unfortunately, this is in the anteroom to the auditorium and can only really be seen after the performance, thus causing a possible bottleneck as the patrons leave. Due to the harsh censorship and taboos, many artworks could have resulted in possible death in their homeland. The International artwork is a stunning meld of East and West.

The set is totally black, with a single armchair in the corner.

All of the technicians for this play were WAAPA trained. The lighting designer, Devon Lovelady, believes in being adventurous with her designs and here she has created a very low level, dim threatening atmosphere that was perfectly complemented by the film post-production soundman, Thomas Moore’s soundscape. The show was stage managed by Claire Mouchemore.

In the centre of the stage a young man (French actor and comedian, Solayman Belmihoub) and a teenage woman (Angela Mahlatjie who is part of the youth group ‘Actors Hub’) are holding a window frame and observing the world ‘through a glass darkly’. They take you through their early teens and their strange feelings that they were too scared to discuss. With no books on female sexuality, no one suitable to talk to and a very limited Internet service, many Muslim Gays and Lesbians thought that they were unique in the world.

Prayer mats are laid on the floor and pomegranates presented on a silver salver. As we hear their prayers, a woman in the full Burka (Naomi Denny is member of the ‘UK National Youth Theatre’) joins in the praying; the three praise Allah, knowing that what they really wish for is haram and against the five commandments.

The director, Mustafa Al Mahdi, has had extensive experience in film, but this is his stage directorial debut; his co-director, Alex Kannis, is also jujitsu trainer! The direction is excellent, with fascinating movements and a good pace. The production team are lucky to have two brilliant mentors, Vivienne Glance and Jay Emmanuel.

The cast were outstanding. I have seen Angela Mahlatjie perform with the youth group, ‘Gap ll’ and consider her to be one of WA’s finest young talents.

Filmmaker Lincoln Russell produced the videos of oriental hand movements and dancers (Rehana Badat and Rami Mustafa). He also created abstract patterns to blend in with the theme.

The quality of the stunning dialogue, direction, acting, lighting and sound were all well above average, with a strong empathy and sympathy being built up. However, I felt that the story was typical of any gay wishing to come out. I would have loved to know much more about the impending threats in their country and what happened to the ‘sinners’ should their love be discovered.

A great deal of talent and hard work, still worth seeing.