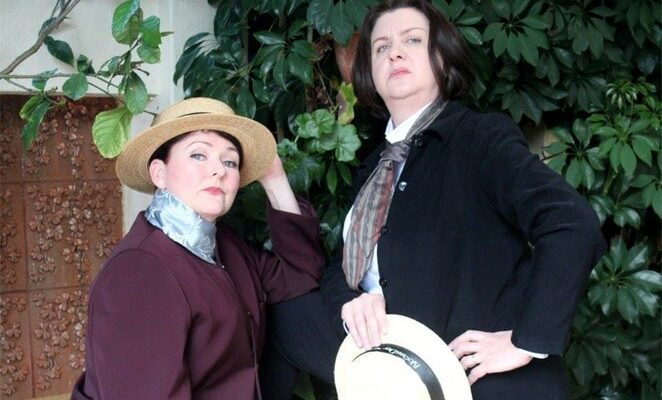 ‘Never Give All of the Heart’ is a dramatic comedy, written and devised by Frank Murphy. It is presented by Song For Ireland Productions, in association with the Australian-Irish Heritage Association of which Murphy is Vice President.

Frank Murphy, who is now Head of Media Studies at Wesley College in Perth, has lectured in Media in Cork, ECU and Murdoch. He has written an exquisite script, blending Oscar Wilde’s life story with snippets from his plays. Also highlighted are some of Wilde’s never-before-revealed personal letters. Most importantly, the writer has managed to retain the richness of Wilde’s writing. This production takes the form of an advanced, moved reading.

This two-hour, world premiere can be seen at the 70-seat, pleasant Kidogo Arthouse, Bathers Beach, Mews Road, (the harbour side of the Round House) in Fremantle. It plays for only three nights, until Wednesday 4th November, with curtain up at 7.30 pm.

The set is a sumptuous drawing room with four Greek Doric columns draped in muslin. There is a classical, white, French chaise-longue centre stage. A lectern is positioned on each side of the set; they are draped in scarlet velour and adorned with roses (set design by Kyree Searle).

Onto the rear wall are projected well-sourced and fascinating photographs featuring Wilde, with copies of historical programmes (sound and graphics by Matthew Williamson).

The lighting design by Ryan Ramage was adventurous, being most successful in creating the correct mood.

The costumes were rich and elegant. ‘Constance’ had a beautiful gown; but a clever selection of hats and shawls allowed Fiona to become many other characters. Lucy wore smoking jackets, waistcoats and blazers with stand collars.

The lights dim and a scratchy recording of Wilde can be heard. This was a passage recorded at the Paris Exhibition of 1889, where he met Edison showing his new recoding machine. An immaculately dressed figure steps forward, it is Oscar Wilde (Lucy Eyre, a stunning likeness). Oscar then starts to tell us of his upbringing, by a father who was the Queen Victoria’s ophthalmologist and a strange mother, known to her friends as Speranza.

Oscar started university at the age of 17, attending Dublin before moving to Oxford when he was still only 20. Soon Wilde met Constance (Fiona Mariah), who, being the daughter of a wealthy Queen’s Counsel was accustomed to the very best – almost bleeding Oscar dry. They were married when Oscar was 29.

Oscar’s writing style was much admired by George Bernard Shaw (Frank Murphy). It was not long before Wilde met ‘Bosie’ the son of the Marquis of Queensberry, thus started his downfall.

Lucy Eyre, who is a much admired WA actor and director, has broken away from her WAAPA PhD studies to give us a wonderful rendition of this infamous author’s life. With subtle hand movements and perfect enunciation, she completely captured Wilde’s flamboyant qualities. Lucy was joined by Australian and international opera singer, star of ‘Australia’s Got Talent’, Fiona Mariah, in this her acting debut. Fiona plays numerous roles, including Wilde’s most famous character, Lady Bracknell. With booming, rich operatic tones, her ‘handbag’ exclamation was one of the best I have heard, receiving a huge applause.

In his director’s role (trained by the Abby Theatre) Frank has brought us suspense, fascination and a touch of sadness – I did not know of Wilde’s subsequent demise – enacted and embodied flawlessly.

This is a captivating tale, certainly not a ‘dry’, uninteresting production, but a rather lively one with a slightly cheeky delivery. A most pleasant and enjoyable night at the theatre.