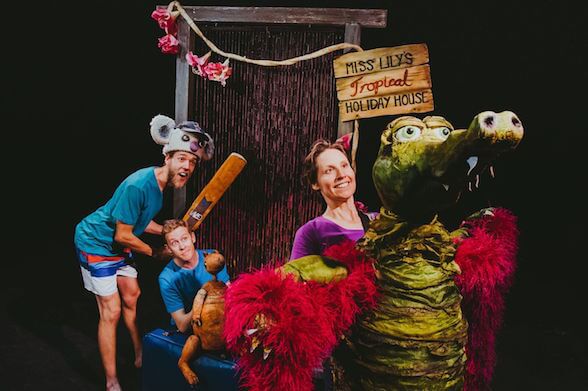 ‘Miss Lily’s Fabulous Feather Boa’ is a delightful children’s book by author Margaret Wild; it was published 16 years ago, and has now been adapted for the stage by Michael Barlow. Wild was born in South Africa and settled in Sydney in 1972. Originally, a newspaper journalist, she then worked in publishing as a children’s book editor for sixteen years. Writing children’s books full-time, she has written more than 70 books, most of them being illustrated. Margaret has gained many awards, including the Children’s Book Council of Australia, Picture Book of the Year Award, and the prestigious Nan Chauncy Award for an outstanding contribution to children’s literature in Australia.

This delightful show for children of all ages is being presented by Spare Parts Puppet Theatre, the leading contemporary group of puppeteers and puppet designers in the country. Over the years, this team of artistic boffins has taught children how to interpret stories, and in turn, the presenters have learned from their audiences what the youngsters love and expect.

This production can be seen at Spare Parts Puppet Theatre, 1 Short Street in Fremantle, adjoining the lawn opposite the Fremantle railway station. Shows are daily at 10.00 am and 1.00 pm, from 4th to the 30th of January 2016.

Three koalas enter carrying a cricket bat; they are Mum (Rebecca Bradley), Dad (Shane Adamczak) and their mad son (Nick Pages-Oliver). The koalas are renowned for being stupid. They are training for a sports competition against the wombats, not knowing that the actual competition sport is footie.

Dragging his suitcase is a large quokka-looking animal called Potoroo. He is exhausted and is relieved to find his hotel – ‘Miss Lily’s’. He is horrified to find that Miss Lily is actually a large crocodile (Rebecca Bradley), she seems very friendly, but will Potoroo be eaten?

Potoroo is sad because he is the only Potoroo left in the world. He has searched everywhere to find others without success.

Miss Lily tries to cheer up Potoroo by dancing the tango with her magical, pink feather boa. In his excitement, Potoroo gets into trouble and perhaps danger too.

This is a delightful story that thanks to clever direction and planning by Michael Barlow, moved at a cracking pace ensuring that even the youngest audience members – there were quite a few aged only four – were enthralled. The youngsters sat open-mouthed at the hilarious action and the visual effects. Lighting designer Karen Cook’s work was exceptional, some of the illusions required careful lighting. Musical composer, Lee Buddle, created quirky fun-filled tunes to complement the action.

Although all of the scenery shifting was carried out by the cast, the production managers, Elliot Chambers and Chad Wetton safeguarded that the costume changes were slick, as the action was timed to the split second. On several occasions, the cast exited stage left and reappeared stage right seconds later, wearing a different costume.

The puppets were some of the best I have seen that the Spare Parts theatre, which can always be relied upon to produce top-class puppets. So respected are Spare Parts that they have linked with WAAPA and Curtin Theatre students creating courses to show the complex tricks behind making and operating a quality puppet. The puppet makers for this show were Iona McAuley, Sanjiva Margio, Leon Hendroff, and Bryan Woltjen. Miss Lily was a full-sized crocodile that appeared most realistic. It had to be light enough for the puppeteer and operator to dance with and yet look convincing. Lyndell Darch supervised the fabric construction.

This play, in the intimate atmosphere of this theatre, was perfect for children over 4 years old. The three actors, who are recognised as first-class stand-up comics, vividly brought to life the many characters of the story. It was wonderful to hear so many young children loving, possibly, their first live show. Highly recommended.