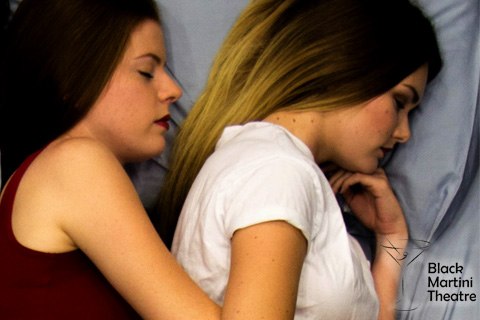 ‘Lazarus Won’t Get Out Of Bed’ is a quirky play for adults, written in 2009 by 25-year-old Queensland poet, playwright and the winner of the ‘Young Peoples Fresh Ink Award’, David Burton. Burton is now a lecturer in Brisbane, and Director of the Toowoomba Empire Youth Theatre.

This 65-minute production is being presented by the Black Martini Theatre Group, in the Murdoch University Drama Workshop, next to car park 4, 90 South Street, Murdoch. The performances are on nightly until Saturday 16th May, with curtain up at the slightly earlier time of 7.30 pm.

Sam Knox’s set depicts a typical young student’s diseased bedroom. Dark blue walls covered in posters of the cinema’s famous heroes. In the corner stands an old wardrobe. The floor is covered with clothes and junk. In the centre of the stage is a double bed with octopus tentacles crawling out from underneath. Stage Managed by Michael Casas.

The sun shines through the drawn curtains. The mound in the bed is static. Lazarus (Alex McVey) is depressed, and has been lying there for the past three days, refusing to move. His flat mate, Panda (Shannon Rogers) is madly in love with Laz, but he is too self-centred with his troubles to notice. Panda tries every trick in the book and various enticements, to get Lazarus to leave his bed, but he won’t even talk to her.

In his little world, Laz sees himself as the master of his own fate there. Then, like a scene from the ‘Lion, the Witch and the Wardrobe’, his wardrobe door opens and out steps the mysterious, mischievous Sidney Arthur (Philip Hutton). Lazarus seems to recognise Sid, but is not too sure who he is.

Sid chats to Lazarus, trying to get him to open up about his past memories and why he won’t leave his bed. Even when Lazarus’s red-hot friend, Mackenzie (Rhianna Hall) calls around, he cannot be tempted from his kip. Lazarus even prefers his exotic fantasies about Harry Potter and Superman, than to make love – or sabre fight (choreographed by Launcelot Ronzan) – with Mackenzie.

Can Sid get to the bottom of Lazarus’s problems? Will Sidney ever be normal again?

Plenty of lateral thinking from the director, Thomas Dimmick, has this very funny play belting along at a cracking pace. The cast are exceptional, with the miserable Lazarus being perfectly countered by the zany and whacky Sidney. Two superb performances, but Philip won the day with his numerous accents and impersonations.

The soundscape called for numerous split second cues, but designer Luke Gratton was well up to the task. His choice of music showed great imagination, and was perfect. The sound effects ranged in volume from 10 to 100 decibels.

The lighting designer, Scott McArdle, created some wonderful effects from sunrise to the dappled light of the fantasy sections. Slick operation by Jess Serio.

Some extra fun was added by the choice of costumes by designer Cat Perez.

If you like ‘Harry Potter’, ‘Star Wars’ and ‘The Young Ones’, then you will love this skilfully presented, madcap blend. Plenty of belly laughs, sensitively mixed in with the odd sad cameo. MOST enjoyable, great theatre.