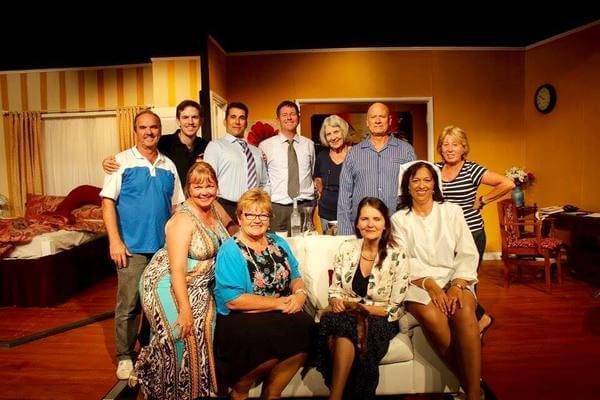 ‘Key for Two’ is a polygamistic comedy, superbly constructed by two of the UK’s best farce craftsmen, John Chapman and Dave Freeman. Freeman originally became famous for his ‘Carry On’ film scripts in the ‘60s.

This two-hour romance romp that goes awry, explodes at 8.00 pm every Thursday, Friday and Saturday night until 7th May at the Rockingham Castle Theatre, 8 Attwood Way, Rockingham, where you can always be assured of a warm welcome and a smile from Sam Taylor’s team.

The scene is about the year 2000 in an upmarket flat in Brighton, on the south coast of England. The bedroom is on the left of the stage – the wall is cutaway, with the bedroom door leading into the sitting room. At the rear is a passage, leading to the front door and spare bedroom.

It is morning and Gordon (Peter Scarrott) is getting dressed. He has just had his once a week ‘treat away from home’, a night with glamourous, divorcée Harriet (Larraine Heckingbottom). Harriett just purrs sex in order to conquer her financial problems. What poultry dealer, Gordon doesn’t know, is that Harriett is ‘working double shifts’ and on another day of the week, is entertaining another wealthy businessman, trawler owner Alec (Danny Joyce) and presenting him with the same bills as Gordon already pays.

One day, an old friend of Harriet arrives. She is smart and bright Anne (Helen Brown), who is married to an alcoholic Kiwi vet, Richard (Rob Walker). Deciding that her marriage is floundering, she arrives to stay. Until now, ‘sweet and innocent’ Harriett has kept her two lovers apart, whilst her husband in Peru.

Veterinary surgeon, inebriated Richard snuggles up on the settee with a fur stole that in his stupor, he hopes to cure. However, by now, the lovers’ wives naïve Magda (Jacki Gahan) and straight-laced Mildred (Lorraine Howes) are starting to suspect something is going on, and are closing in on Harriett’s little game.

A good farce has a selection of ‘revolving’ doors – this show has 5, and they are fully employed with split-second timing.

This is a genre that can collapse in the wrong hands. My expectations at the ‘Castle’ are always high, but I have never been let down.

This is a thoroughly brilliant romp, perfectly handled by director David Heckingbottom. In the second Act it gives us a cast faced with a complex, intricate script and yet the physical disasters were perfectly and accurately carried out. Not a beat was missed as the finely observed characters bungled through each fast moving scene.

Leading lady, Larraine, was magnificent and was well supported by her crippled lovers, Peter and Danny. Her sexy friend Helen, with her beautifully underplayed drunk husband, Rob made the show a great laugh. The cheated-on wives Jacki and Lorraine, were delightful.

How often do you see the actors line up for the final bow, and then bend in an uncoordinated wave? This director had a fun twist to this show, with a final fight for Harriett’s hand.

Tickets are now on sale for the August spectacular. Be quick, these shows are almost always sold out.