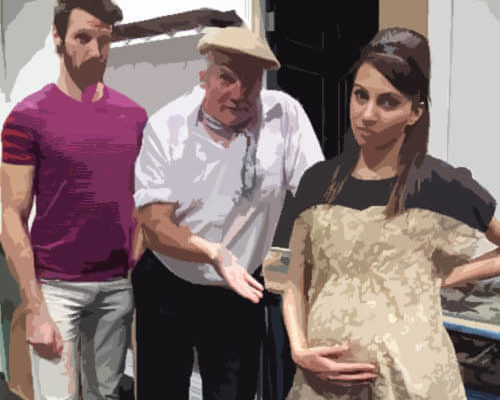 ‘It’s all Greek to me’ is a very funny comedy, written by the well-respected WA playwright, Noel O’Neill. No doubt, it has been based on Noel’s experiences living as a student in London. This 105-minute World Premiere is being presented nightly at 8.00 pm, in the Old Mill Theatre on the corner of Mends Street and Mill Point Road in South Perth, until Saturday 17th May. There is one matinee on Sunday 11th May at 2.00 pm.

The set shows a 1960s Greek home in the ethnic area of outer north London, Stoke Newington. The walls are pale blue kitchenette, with white Doric Greek columns around the doors. There is an old gas range in the corner. On one wall is a high self, laden with Greek religious icons. The stained glass window above the sink hides the bins in the backyard.

The curtains rise and the music of Gerry and the Pacemakers is playing in the background. This is the home of truck driver, Nicky Plankos (Kim Taylor) and his loving wife of many years, Athena (Vivienne Marshall); well I say ‘loving’ but at long last Athena has caught onto the fact that her husband seems to have a woman in every town.

Nicky arrives on the house doorstep with his latest flame, Circe (Nada Dilevska). She is an uncontrollable, insatiable nymphomaniac, who is ripping at Nicky’s clothes without a care that Athena might hear. When she is rejected, Circe puts a curse on the home and leaves.

To his horror, Nicky finds that Athena has heard most of the conversation. Then, talking to the audience in the style used by Michael Caine in ‘Alfie’, Nicky secretly tells us of his despair – and other nice ‘pairs’ that he has encountered – and offers valuable advice to the men present.

Nicky and Athena’s son, Dimitri (Cameron Leese) has not got two brain cells to rub together, and seems to spend most of his day in the toilet with the latest copy of ‘Tit-Bits’ magazine. If a sentence has more than three words in it, Dim will be confused. Their intelligent daughter, Jenna (Valerie Dragojevic) has learnt a new lesson, being a few months pregnant.

Unfortunately Dim has lost a letter from Greece, announcing that a long lost, lonely and verbally challenged cousin, Stavros (Emilio Evans) would like to come to London and find a wife. After too much Ouzo, Nicky promised Stavros that he would definitely find one, but to ensure success in his search Nicky hires the local Greek guru / fortune teller, Andronokos (Rex Gray). They find Katarina (Jess Stenglein) but she is like Frank Spencer’s twin and most unsuitable.

Will Stavros have to go home, unloved and alone?

Having an English lecturer as an author, it isn’t surprising that the story was well structured, filled with puns, metaphors and very funny – slightly crude – lines. The experienced cast, many of whom have won awards, helped deliver the rich characters of the story. The well considered mannerisms, costumes and accents all went into the personality.

A single, minor complaint was the tatty ending, where the play in the last five minutes seemed to finish three or four times, with one scene lasting possibly only a minute.

The teching was well carried out by ‘twins’ Kath Carney on lighting and Graeme Johnson on Sound.

Murdoch theatre trained Valerie Dragojevic, has directed this, her second play by Noel. The first ‘Holly and Ivy’, won a prestigious Finley award. Although still young, Val has captured the humour and the personalities perfectly and squeezed every chuckle from the script. The cast all proved to be born comedians, with excellent chemistry and pace.

A funny play, not a farce, with hilarity throughout. Certainly worth a trip out, even on a cold night.