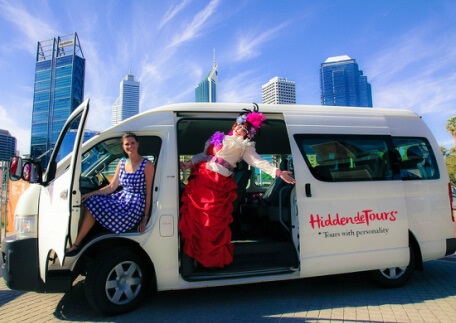 ‘Hidden deTours’ are trips in a comfortable 14-seat minibus around Perth and Fremantle. There are wine and pub trips, but we were taken on a Comedy Tour of Perth. Many may not consider this not to be Independent Theatre, but with the clever script written by Monique and delivered by the now world Famous, ‘Sharron’ as the hostess with the mostess, a good night was assured.

Tastefully dressed in a colourful fascinator, her signature white and gold combination spectacles, subtle makeup and a tight fitting, tasteful leopard skin dress with matching high heels, Famous Sharron met us at the bus for the two-hour comedy tour.

Our first stop was The Shit Tower in Northbridge, a building I have passed many times without knowing the incredible history behind it. The tour took us around Northbridge, past the museum, which was originally the prison, where many men were well hung. As the bus crept along the streets of Northbridge, before crossing into Perth city, Famous Sharron showered us with fascinating facts. In the central CBD, we had a captivating 20-minute walk before joining the bus again, soon to learn about the main use for the alarm bells in the nurses’ home.

After a couple of hours, we were dropped off at our chosen restaurant (not part of the tour) for a good meal. With tears in our eyes – from laughing – we said Goodbye to Famous Sharron, who had remembered everyone’s names and their penchants.

A clever, well-researched, historical script accompanied by appropriate music to liven the trip. Even a tasty morsel to match the facts.

Glad you gave up your chemistry talents to become a super tour guide. A hilarious night out, yes, Shazza is the one for me.