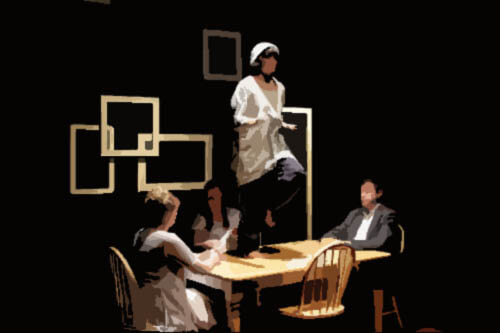 ‘Frames’ is a poignant play that was researched and written by the multi-award winning, WA playwright, Louise Helfgott. Louise, who had already gained a BSc (Hons. in Psychology) from the UWA and a Grad Dip (English) from Curtin University, has just completed her PhD in Creative Writing. Recognised on a national level for her writing skills in many genres, her book ‘A Closer Sky’ was nominated for an AWGIE award in 2005. This play, ‘Frames’ has twice been nominated for Australian awards and awarded the prestigious Magdalena prize for ‘outstanding feminist research’ in 2013.

Class Act Theatre, WA’s leading company in presenting unusual and quality local works, are proudly presenting the premiere of this theatre adaptation at the Studio Theatre, Subiaco Arts Centre, 180 Hamersley Road, Subiaco. The 2-hour play commences nightly at 7.30 pm until 31st May, when the run moves to the Mandurah Performing Arts Centre from the 4th – 7th June. It was in Mandurah that Louise won a number of prizes in the Mandurah / Murray Literary Competitions for her poetry, plays and prose.

The stage is surrounded by black drapes. There are numerous white picture frames at different levels around the periphery. There is a dining table and four chairs centre stage.

A typical Australian family are just about to have their evening meal. The somewhat neurotic, domineering mother (Angelique Malcolm – Pascoe) is panicking over a simple ‘what to wear’ decision. Her daughters, Lizzie (Maja Liwszyc) and her younger sister (Keren Schlink) who is munching on a muesli bar, are seated at the table playing with their iPhones. They are waiting for their indifferent father (Maitland Schnaars), who seems to enjoy a little too much drink, to return from another ‘hard’ day at the office.

We flash back six years, to when Lizzie was ten years old, see her happy carefree attitude and the wonderful relationship that she had with her family.

Back to the present time, the father arrives home and the arguments start. The meal is served, but Lizzie does not show any interest in the dishes offered, and prefers to go out for a run. Lizzie fancies Ben (Nick Pages-Oliver), but he too has many personal problems and is depressed, and their feelings never really develop.

Will Lizzie and Ben win their psychological and social battles? Indeed, will their parents win their battles too?

The topic of this play is very serious, but it has been delivered in a most acceptable way. It does not feel like a lecture or a medical presentation. The dialogue is filled with humour and is scripted skilfully to fit today’s teenage style of conversation. The symbolism of the ‘frames’ is meant to include not only the windows and doorframes, but is carried through to represent mirrors and iPads. The audience becomes aware of Lizzie’s changing body frame, and several more teenage problems are hinted at. The actors captured their characters well and skilfully demonstrated the family problems.

The lighting design, with one or two clever effects, was designed by Aaron Stirk.

The director, Helen Doig, and actor, Angelique Malcolm, were recognised in last year’s Actors’ Equity Awards list for their work in the profession.

This a play that parents and their teenagers should see. Well presented, with a genuine air of lives that sadly, can be seen too often in houses in Australia.