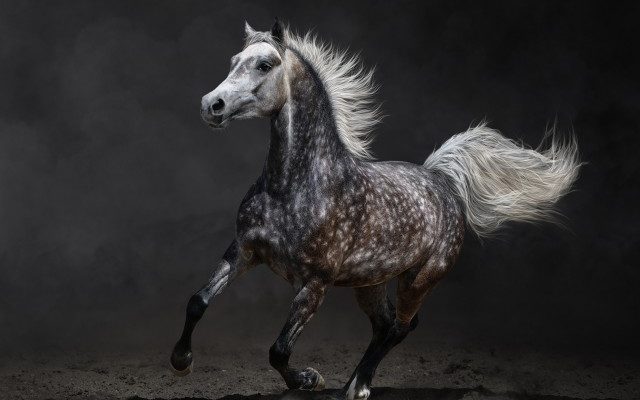 ‘Equus’ was originally staged in 1973, and is Sir Peter Shaffer’s Tony Award winning psychological thriller. It is based on a real occurrence – as heard by Shaffer in a pub – that was carried out in Suffolk, by a 17-year-old boy.

Shaffer was born in Liverpool in the mid-1920s; despite being Jewish, he went to school at St Paul’s School in London. To replace the miners who had gone to war, Shaffer was conscripted into the coalmines by the Minister of Labour, Ernest Bevan – a Bevan Boy. After the war, he went to live in New York where he started writing. He returned to the UK and became a professor at Oxford, and was then knighted in 2001.

The Melville Theatre Company is presenting this bold and emotive play at the Melville Theatre, on the corner of Stock Highway and Canning Highway in Melville. The two and a quarter hour play has ‘curtain up’ at 8.00 pm on Thursday, Friday and Saturday nights until 23rd May, with a 2.00 pm matinee Sunday 17th May.

The scene is 1970 Winchester, in the south of England. The open stage shows a magnificent stable with wooden plank walls, and a central horse stall. The roof of the stable is made of 10 cms wood strips with equal spaces between, giving the effect of a complete ceiling but allowing dappled light to flow through. The Jensen family, Jay Shaw, Sean and John Bullock, Jeff Hansen, Peter Bloor, Ross Bertinshaw, Alan Kennedy, and Darren Goodison, constructed this realistic set.

The horses’ heads hang on the wall. Wooden benches are all around the stable, allowing it to become a hospital waiting room and cinema; the cast are seated on these benches throughout the whole production. At the side of the stage, on the apron, to the left is a hospital wardroom, to the right Dr Dysart’s well-furnished consulting room.

Nicola Gredzuik’s horses’ heads are stunning, and even seem to have a personality. Nicola has constructed them using her immense knowledge of millinery. She also chose the costumes of the era, wonderful flared trousers and pleated skirts.

Martin Dysart (Alan Kennedy) is a weary and lonely hospital psychiatrist, who has become bored dealing with hopeless cases that have no desire to be helped. He is counting the days until he retires and can go to Greece to research the Hellenic history. Dysart begins with a monologue outlining the case of 17-year-old Alan Strang (Oliver Kaiser), and how in doing horrendous deeds, the youth found release from the monotony of his work. We then flash back a year or two.

Hesther Saloman (Jay Shaw) is the local Magistrate, given the ominous job of dealing with an attack on six horses. She calls at the hospital to see her old psychiatrist friend, Dr Dysart, to have him interview the strange boy who carried out the act.

The nurse (Sean Bullock) leads the withdrawn and silent boy to Dysart’s consulting room. In the beginning, Alan’s only response to the psychiatrist’s questions was to sing TV jingles and give a cold stare. As a result of this disturbing consultation, that night Dysart had a gruesome dream.

Next day, when Alan’s parents arrive at the hospital, Dysart hopes to find clarity, only to discover that Strang’s Bible-thumping mother, Dora Strang (Lauren Henderson), is a trained teacher who reads the good book to Alan daily. His father, Frank (Cary Hudson), who is a local printer, is so irritated by the mother that he so preaches atheism to his son.

Dysart guesses that truthfulness is probably the best approach for this confused youth. He then learns from the young man, how the oppressive father has unknowingly created links between anger, violence and religion in his son’s mind.

Whilst working in an electrical shop, Alan serves Jill Mason (Elouise Eftos), a young woman that seems to have everything he has not – freedom, vivacity and happiness. When she asks to buy horse clippers, Alan tells her of his equine interest and so she suggests that he applies for a groom’s job at Harry Dalton’s stables where she works. Having no real friends, Alan begins to show a sexual attraction to the horses with their sweaty, muscular bodies. One horse in particular, Nugget (Michael Fagan) which Alan calls ‘Equus’, is his equine God that he rides in his fantasies to kill his enemies.

Later, when Dr Dysart meets the stable owner (Darren Goodison), he is told that Alan was a great worker who kept the stables immaculate.

Rhonda Beresford, Nicola Gredzuik, Kate Hitchins, Helen Jackson and Abbey McCaughan played the horses and ensemble. With their enactment, they brought genuine horror with the attack scene and a broad smile with the cinema snippet.

Lars Jensen is a brave man to tackle such a controversial play, but this he does with aplomb. I have seen the film and two other stage versions of this play, and in all cases, a great deal of emphasis has gone into the grandeur of the production, and promoting the nude scenes.

Lars has given this production the ‘common’ touch, both to the characters in the play and the stable set, most authentic – not the spectacular sets seen elsewhere. You can readily connect to each and every character. Even though Alan is weird, the direction is so sensitive and Oliver’s acting so outstanding, that the storyline is extremely easy to follow. The parents are peculiar, but you can certainly feel for the family’s plight. The doctor / patient relationship is powerful and tangible, congrats also go to Alan Kennedy.

Even without any nudity, this is definitely an adult play. Beautifully acted and presented. A powerful and admirable production, a treat for those who enjoy a quality, award-winning script. Highly recommended – drama at its very best.