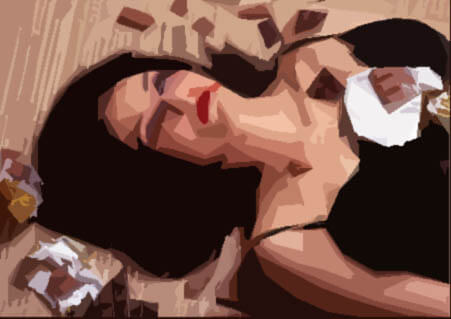 ‘Death by Chocolate’ is a comedy thriller by American playwright, Paul Freed. It is being presented at the Stirling Theatre, Morris Place, Innaloo. The 100-minute play shows nightly at 8.00 on Thursday, Friday and Saturday until Saturday 31st May.

There is an impressive display in the entrance hall, creating interest in the production. The raffle, for once, has a prize really worth winning, a beautiful, large box of Margaret River Chocolates.

It is the present day in the main office of the Meadowbrook Health Resort, a manor in upstate New York.

Henry Meadowbrook (Gary Billingham), the founder of the Meadowbrook Health Resort, is sitting in his dark office, working at his desk. From the gloom, a hand appears and a gun fires. Henry has been murdered. Within minutes, Henry’s right-hand man, Alfred Mellox (Tom Brandwood) finds the body, tidies up the room and then screams “the boss has been murdered”.

The pretentious Lady Riverdale (Karin Staflund), who has garnered a fortune from making chocolates, has just bought the resort and is planning tomorrow’s grand re-opening. Lady Riverdale has asked her attractive private secretary, Dyslexia (Sophie Prober) to help John Stone (Chris Henderson), the new manager of the Resort. Stone is quick-witted, but misinterprets everything that people say. They organise the catering for the opening with cheery Edith (Julie Holmshaw), a famous TV chef.

Lady Riverdale and the gym manager, Ralph Deadwood (Ian Fraser) argues. It seems Ralph knows something of her past that must be kept from Margaret Daniels (Jenni Glassford) a top fashion magazine journalist. Another two deaths ensue – poisonings – but the police are not called for, and Anne, the resort nurse (Natalie Aung Than) simply panics at the sight of death.

Ed Parlor (Gary Billingham) a mystery writer arrives at the resort and gets pleasure helping John Stone find the killer.

Everyone gathers in the office. Sitting on the settee is Henry’s grossly overweight daughter, Sweet Pea (Christine Ellis) consoling herself by eating muffins. Sweet Pea doesn’t even interrupt her eating to answer basic questions. Next to her is Dick Simmering (Christopher Moro), the aerobics instructor.

Can the killer be found before yet another death occurs?

I know how hard it is to get set builders and indeed volunteers of any type to help in community theatre, but the choice of colours and general decor didn’t suggest an up-market mansion or resort.

The American accents used by two of the cast (Gary and Karin) were superb; the others, perhaps knowing their limits, were sensible and decided to go for straight English.

The play was described by the author as ‘a farce’; sadly the director has taken his word and directed the play – perfectly – as a farce. I have seen this play twice before, once at Melville several years ago, and recently at Ellen Brook. These productions moved the setting to Australia and handled the acting as a standard comedy, both these points worked perfectly. The location is irrelevant and so it is unnecessary to burden the cast and audience with an accent.

This is a whodunit, but when the first shot was fired, in a supposedly dark office, I could clearly see and recognise the murderer; the next two hours were almost superfluous. Chris Henderson’s comedic delivery was excellent, and he delivered most of the double-entendres and puns across perfectly, but the audience still missed so much of the humour.

Sorry, I preferred the previous productions, but this was still good fun and well-acted. It will certainly keep the new punters guessing to the end.