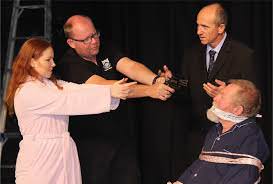 ‘Death and the Maiden’ is an Olivier Award-winning, psychological thriller from the pen of Ariel Dorfman, a Jew born in Buenos Aires towards the end of World War 2. He has written a couple of dozen books and documentaries; mainly on the topics of tyranny, academia and human rights, they have been translated into more than 40 languages. He has won numerous international awards for his writing and TV plays.

Living in Chile as a cultural adviser to President Salvador Allende, he left the night before the Pinochet coup. He has been a university professor of literature in North Carolina, since 1985 and became an American citizen in 2004.

This two-hour play can be seen at 8.00 pm on Thursday, Friday and Saturday evenings until the 21st May. There is also a Sunday matinee on 15th May at 2.00 pm.

‘Death and the Maiden’, is a nick name for the classic chamber music (used in the play) about the terror and comfort of death, namely the ‘String Quartet No. 14 in D minor’, written by Franz Schubert 1824, when he was 27 years old – only three years before he died of tertiary syphilis.

The scene is beach house, about 1980, in an unspecified post-dictatorship country (generally assumed to be Chile).

The stage has a third as the outside balcony festooned with Chinese lanterns, and facing the sea. The remainder is a bright white dining / sitting room, entered through patio doors. A bamboo curtain at the rear leads to the main bedroom, another curtain leads to the kitchen and spare room. The décor is international ethnic.

The scenery was designed and constructed by Jacob, Lars and Vanessa Jensen, and painted by Kit Leake and Barbara Lovell. The costumes were by Nicola Gredziuk. High quality, realistic soundscape by Lars and operator Sean Bullock.

It is late evening, and Paulina Escobar (Kayti Murphy) is relaxing on the veranda listening to the waves crashing in the bay. As a car drives up the road to the isolated house, Paulina rushes into the sitting room and takes a gun from a drawer. To her relief, it is only her lawyer husband, Gerardo (Nick Kadmos).

On his way home from a Cabinet Meeting, where he has been offered a major post, his car has had a puncture. He then found the spare tyre was also flat. Luckily a medic, Dr. Miranda (Alan Kennedy) was passing and helped Gerado get home.

As Paulina’s husband talked to the doctor over a drink. With horror, Paulina couldn’t help thinking that she recognised the doctor from her days as an anatomy student in the university.

Director Lars Jensen has been most fortunate in getting three such superb actors. Alan Kennedy seems to be nominated for an award for almost every show in which he performs. It is only months since one of Kayti’s dramas won best production. Nick has only recently returned to Perth, but he too has a well proven track record.

The script is demanding, it needs a director that can handle the storyline with conviction and yet sensitivity, which Lars has achieved impeccably. The power, suspense and pure electricity that this team built up was amazing. There were passages of pure chill, along with someone torn between love and justice, and the GP simply helping a man in distress only to face danger.

The story leaves one in no doubt what happened in the dictatorship, but the story is more of a mystery than a history lesson. A powerful topic given first class treatment by Community Theatre’s best. Highly recommended.