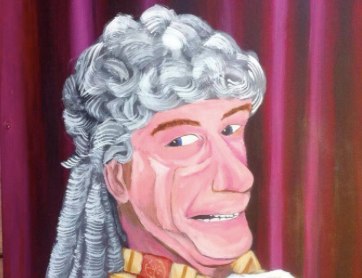 ‘Blackadder the Third’ is based on BBC tv’s hilarious series written by Ben Elton and Richard Curtis. It is being presented by the fairly new but very talented actors’ group, Serial Productions. The major roles of Blackadder, Baldrick, and Prince George are being played by the same actors who appeared in last year’s much-admired, sell-out production of ‘Blackadder Goes Forth’.

This wonderfully zany play can be seen at the Old Mill Theatre, on the corner of Mends Street and Mill Point Road in South Perth. The two and a half-hour performances are nightly at 8.00 until Saturday 11th October. There are two matinees, one on Saturday the other on Sunday. Part of the proceeds will go to Telethon 2014.

George Boyd’s magnificent set designs, (here built by George, Liam Kirwan, and Brendan Tobin) always seem to leave other theatrical groups behind when it comes to innovation. For this show, we have two revolving stages, surely a first in Perth for both Community and Professional Theatre.

There are no fewer than nine sets! Including a kitchen, theatre, the Prince’s Chambers, coffee shoppe, dining room, stagecoach, a leafy copse, Amy Hardwood’s room, and a colonnade. Adrian Ashman’s décor painting is immaculate and when coupled with Lesley Sutton’s well-sourced unusual props, most realistic.

The stage crew of David Seman and Owen Davis, under the supervision of stage manager Rob Warner, were amazingly efficient with their numerous complicated scene changes. In between scenes, they had to silently work on décor modifications ready for the next stage revolve. Congratulations on the efficiency and silence.

It is the Regency Period in England, around 1815, and we find ourselves at the theatre with the mad Prince Regent, the foppish Prince of Wales (Rodney van Groningen) who is soon to become George lV – as soon as his even madder father, George lll (Brendan Tobin) dies. George is watching a production of ‘Julius Caesar’, but is relying upon his head butler, Blackadder ((Joe Isaia) to explain the storyline. When Brutus (David Gregory) stabs Caesar (Michael Lamont) the butler has to explain the difference between reality and acting, to the distressed Prince who thinks he has just witnessed a REAL murder.

Blackadder is frustrated by the fact that such a brainless idiot should have so much wealth, and sets out to relieve the Prince Regent of some of his wealth. As always, Blackadder relies upon the help of his filthy dogsbody, Baldrick (Keith Scrivens) to achieve his ambitions. With more money, Blackadder could perhaps gain the love of the Coffee Shoppe owner, Mrs Miggins (Jacqui Weaver).

Perhaps Blackadder can find a wealthy wife for the Prince; there is the beautiful but mentally immature, Amy Hardwood (Clare Fazackerley Wood) perhaps she would make a perfect suitor; or perhaps Sally Cheapside (Natalie Watson), as she has a daft, rich father.

In this tale, Blackadder faces world leaders and famous authors in his pursuit of wealth.

Director David Gregory again leads this wonderful team. David manages to squeeze every ounce of humour from the situations. With the unique strange dialogue of Baldrick, to the cutting tongue of Blackadder, the gushing foppishness of Prince George – along with his demanding athletic performance – the laughs flowed endlessly.

This was the opening night and the techies, lighting (Liam Kirwan) and sound (George Boyd) cue card must have looked like a Harry Potter novel with the dozens of cues, many of which had to be carried out with split second accuracy. There were literally a couple of dozen different scenes, which on TV could be easily edited, but on stage, the actors have to move from one set to another. An audience can accept looking at an empty, lit set waiting for the actor to enter, but to sit in the dark until the actor is perfectly in place before putting on the lamps definitely slows the flow of the comedy. This results in the poor actors having to warm up the audience at the beginning of every scene. The techies were really superb, but just that little bit earlier with the lighting would help.

If you are a fan of the TV series, this truly magnificent cast give their all and the characters instantly recognisable. If you are too young to know the series, then go along and see a madcap production presented perfectly.

This whole production oozes quality, from the tickets, the best programme I have ever seen for a community production, the fine scenery, Clare Wood and Jacqui Warner’s stunning costumes and last but not least, the action packed, perfectly paced acting – great chemistry. An excellent show.

I do not need to say ‘See it’ as most people will have booked already. Be warned, the tickets are selling faster than last year – and it was a sell-out.