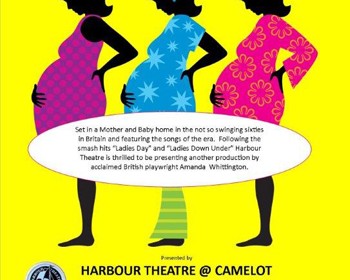 ‘Be My Baby’ was the first play written by the Nottingham-born, freelance journalist, Amanda Whittington. She wrote this astute and challenging play when still in her mid-thirties. Despite the tragic topic, it is a wonderful blend of suffering, beautiful lyrics and black humour. This is Harbour’s third Amanda Whittington production, the first two; ‘Ladies Day’ and ‘Ladies Down Under’, also directed by Peter, were huge successes.

With the help of MosArts, this will be Harbour Theatre’s second in their new, stylish Art Deco premises in Mosman Park. The theatre is located within the Camelot Theatre complex, 16 Lochee Street, Mosman Park and their 100-minute performances are on Wednesday, Friday and Saturday evenings until 6th September with curtain up at 7.30 pm. There are two matinees.

A little history. Until the 1970s, any illegitimate child born in Britain was at a great risk of being simply taken from their mothers, or conned out of a possibly loving home, by the ‘well-meaning Authorities’ or even over-proud families. Many of the mothers were told their children were happily adopted, whilst a large number of these 16,000 ‘saved’ children were told they are now orphans, and sent to Australia (read the book ‘The Leaving of Liverpool’) to homes and institutions like Bindoon and Fairbridge, for their own good.

British companies like Walls (who manufactured ice cream and sausages), were upset by this treatment and sent money to make the life of this other ‘stolen’ generation of children a little better. Fairbridge built their Chapel with Wall’s funds.

It is 1964 in the North of England. The opening scene is Mary’s sparsely furnished bedroom and then the set becomes an even less inviting dormitory in the ‘Mother and Baby Home’. To the left of the stage are the Matron’s office and a laundry. Stage Manager was Jo Sterkenburg, assisted by Meredith Hunter.

The lights dim and a small spot picks out to the right of the auditorium, the young lead singer with her guitar (musical director, Toni-Maree Olton) dressed in a green satin evening dress. To the left of the audience are her three accompanists, ‘The Oltonettes’; Jade Unwin in red, Natasha Smith in blue and Sarah Courtis in purple gowns. As an integral background to the play, they sing the melodies of the sixties in perfect harmony, complete with all of the hackneyed hand movements. They include the Ronette’s title song of the show, ‘Be My Baby’, whose lyrics become so very poignant.

The somewhat naive, 19-year old Mary Adams (Emily Lloyd) is very pregnant, but unmarried. Faced with the undoubted shame and cruel jibes by the neighbours, her prudish mother, Mrs Adams (Grace Hitchin) insists that the baby is born away from home and adopted out immediately – ‘after all, it is for the best’.

Soon, Mary finds herself in a home run by the church for pregnant, unmarried mothers. They charge the clients for their accommodation, and then the prospective parents pay enormous fees for the adoption agreements.

Mary is sharing a room with the rough, streetwise Queenie (Sarah Christiner). One day, they are working in the laundry, washing and folding the sheets with two other girls Norma (Nicole Miller), and Dolores (Sophie Cushing) neither of whom are 100% sure how they became pregnant. With a medical dictionary they found lying around, and Queenie’s knowledge, they can probably work things out.

When Mary’s baby is born, the realisation that she has to give up the child for adoption, starts to dawn. The imperious Matron (Nicola Bond) refuses to be swayed by the girls’ requests, but (with clever acting); there is a subtle hint that the Matron may be carrying out instructions that are against her own personal, compassionate feelings.

Director, Peter Kirkwood’s cast of ‘pregnant girls’ are too young to remember the times that they are enacting; however, they still truly captured the ordeal of the situation and skilfully conveyed this to the audience. There were many of the older members of the audience very moved by the play. Many of us had friends who, with their mothers, ‘worked away’ for a couple of months and on their return, the mother (!) was found to have had a baby. This child was then brought up as the daughter’s sister and not her child.

The melodic rendition of the old songs brought light relief to those parts when the play got a little gloomy, as the girls’ dreams collapsed. The lyrics then took on a new meaning in the circumstances.

Rob Tagliaferri has handled all of the teching, lighting and sound faultlessly. The props of the era were well sourced e.g. the 45s case, an auto-change record player and even the army blankets with the red stripes, fond memories for many of us. The costumes ranged from the striking, shimmering gowns and elbow-length, white gloves, to the scratchy grey material that made up the smocks for the pregnant girls. It is these little finer points that give that extra depth to a production.

A tricky play to put on, as it demanded several genres such as music, humour and pathos, combined with the tragedy and innocence of the girls concerned in the adoption. Very well acted and the full houses give credence to the successful production.