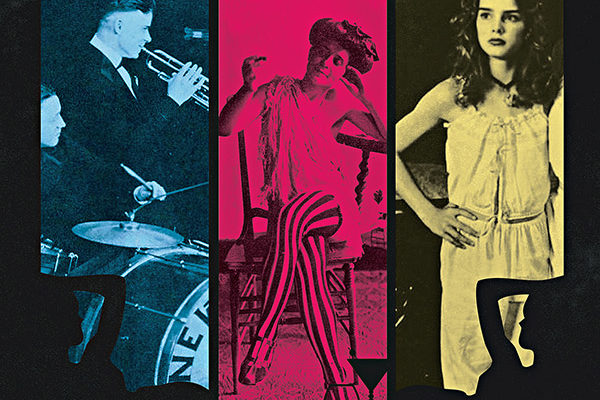 ‘Basin Street Blues’ is an adult musical, written by Mundaring ex-Councillor, John Beaton. John was a member of the State Executive at the Australian Writers’ Guild, and a lecturer in Screen topics at Curtin, Murdoch and WAAPA, receiving a WA Screen Industry Award for his Outstanding Contribution.

John, who has been a jazz pianist for 50 years, named his play after Spencer Williams’ 1926 Dixieland song, ‘Basin Street Blues’, made famous two years later by Louis Armstrong.

In 1897, New Orleans turned its Storyville Street into an area for illegal, but accepted, prostitution. Being near the French Quarter, it became known as Rue Bassin (Basin Street), due to the land shape enclosed by the peripheral, surrounding canal.

The Darlington Theatre Players present this two hour, lively musical spectacular at the Marloo Theatre, 20 Marloo Road, Greenmount. Performances start at 8.00 pm every Wednesday, Friday, and Saturday until the 8th August. There are Sunday matinees at 2.00 pm.

The set was another ‘George Boyd special’ – does this man ever sleep? The effect was dazzling. It was the interior of a brothel, ‘The Rising Sun’, in New Orleans in 1917. The walls are dark burgundy, and a carpeted staircase on the right, went up to the working girls’ bedrooms. The band is situated in view at the back of the stage.

With George’s sets, when the curtains open, it is the little finishing details that make the audience gasp; such as the stair newell posts have carved lions on the top, the stained glass sunrise above the main door, nothing is too much effort. The gas lamps and other wonderful props (Lesley Sutton, Liz Rusha) gave the final touch of quality.

The lighting design (Mike Hart) was magnificent, truly a professional standard. David Bain and Mike Smale’s operation was sensitive and perfectly timed e.g. the lighting of the lamps really looked as though the gas mantles were warming up. The sound design for the street scene was at a perfect level, and gave excellent atmosphere (designer Greg Rusha, operated by Greg and Leighton Hughes).

The stage is in darkness, a shadowy figure can be seen descending the stairs with a lit wax taper in her hand, it is Pearl (Kylie Isaia); one of the bordello’s most experienced working girls. No sooner had she unlocked the main door, than her so-called boyfriend, a bullying pimp, Frank (Pearce Patrick-McGrogan) burst in demanding his cut of Pearl’s earning. His cut being most of what she had. The Madame of the house, Lottie (Amanda Minutillo) seemed to have little sympathy; but the reliable bouncer, Wash (Richard Mananga) soon threw ‘The Dude’ out. It was easy to see that Tony (Toby Millar), the piano player felt deeply for Pearl.

A lusty customer (Robert Beaton) tried to catch the eye of young Rita (Caitlyn Hughes), but even the impecunious old man (David Zuiddam) across the room seemed to being having more success with the girls.

When a highly intelligent and attractive virgin, 16 yr-old Josie (Sarah Jackson) arrives, Lottie asks her to take over. Not even wealthy rail worker, Gus (Dowal Hall) who comes in for his weekly constitution, could he get pure Josie. Thankfully, he seems happy with the sassy Lulu (Rachel Vonk – wild) instead. On the other hand, when the Mayor (Iain Martin – great ukulele solo) arrives for some light entertainment – watching the slinky, sexy dancing girls (Jessie Ou Yang, Jordan Tabb) will Josie succumb? Or could it be the wealthy French businessman, Auguste (Paul Reed) and his sexually inexperienced son, Henri (Radomir Kobryn-Colleti) who wins her body?

The director, Aarne Neeme, has had a lifetime in the theatre. He has been in a senior position at the Octagon, Playhouse, Hole-in-the-Wall and even been Head of Acting at WAAPA, so it is little wonder that he was recently awarded the Order of Australia. Here, Aarne is assisted by Lee Thompson, the pair giving us a truly lively and uplifting show. The cast were coordinated and retained their powerful deliveries throughout this energy-filled show. Most of the songs were instantly recognisable, and pleasantly performed.

Choreographer Premala D. Sangarananda has learnt her art in several countries, and as a result demands the very best from her dancers. They waltzed, skipped, seductively tempted the audience, leapt, high kicked – those poor girls really had to work, but they smiled for every second and were magnificent, congrats to the whole team. The costumes (Marjorie DeCaux, Rachel Vonk) were delightful, from the simple cotton chemises and long frilly drawers, to The Madame’s glittering designer gown. Topped off with their crowning glories, hairstyles and makeup by Nicole Jelly.

Jazz tends to be one of these musical genres that people can take or leave. Mention jazz and folk will think of discordant, cacophonous music, with everyone in the band playing a different refrain, whilst you try to spot the tune. This band, under the musical direction of Iain Martin and John Beaton, gave the audience many enjoyable melodies, most with a light, sleazy, Dixie / Ragtime jazz foundation.

With an old upright piano centre stage, being ‘played’ by ‘Tony’; Radomir Kobryn-Colleti was actually playing another keyboard hidden behind the piano. A very convincing ‘duet’.

The final number ‘House of the Rising Sun’ was sung beautifully by ‘Pearl’, delivered from the heart and doubtlessly caused a few audience tears as it reflected on this prostitute’s life story.

This review refers to the opening night performance, a packed house. Not surprisingly, I understand that almost the whole season of this very different play, has already been sold out, so be quick or miss out. A very well thought out and presented musical. Top-quality.