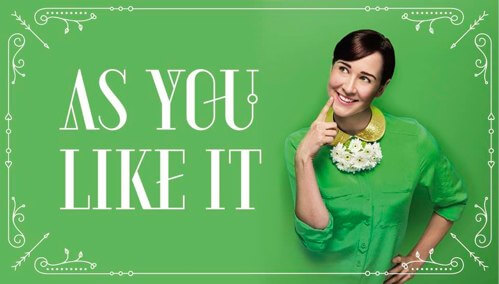 ‘As You Like It’ is a fun-filled, light-hearted comedy written by William Shakespeare in 1599 but not published until his First Folio in 1623. This very contemporary production, complete with iPads and mobile phones, has been produced by the Black Swan State Theatre Company. The performances are 2 hours and 50 minutes and can be seen at the Heath Ledger Theatre, within the State Theatre Centre, Northbridge nightly at 7.30 until 1st June.

The opening set is of a stage and backdrop made of the same wooden panels as the theatre wall. When the scene moves to Arden, the forest scene is truly breath-taking, and combined with the glorious autumn lighting brought gasps. (Set design, Christina Smith assisted by India Mehta; with Matt Scott as lighting designer).

Being the eldest son, Oliver (Brett Dowson) has inherited most of his father, Sir Rowland de Bois’s estate. Instead of looking after his younger brother, Orlando (James Sweeny – brilliant), Oliver decides to keep all of the inheritance and even sacks the old family retainer, Adam (Igor Sas). When Duke Frederick’s (Geoff Kelso) court wrestling champion, Charles (Andy Fraser) hears that Orlando has challenged him to a fight, the wrestler promises Oliver that he will thrash his brother.

Duke Senior (Geoff Kelso) has had his lands appropriated by his brother, Duke Frederick, and has fled to the Forest of Arden, to live rough with his exiled courtiers. Duke Senior’s schoolgirl daughter, Rosalind (Jovana Miletic – superb) and her cousin, Celia (Grace Smibert – excellent) are like sisters, and so the Duke Frederick allows them to live together.

When Orlando fights the wrestler, the two girls watch and drool over Orlando’s triumph. When the popinjay organiser, Le Beau (Brendan Hanson) introduces them to the winner, Rosalind instantly falls in love with him, and he with her. The old servant, Adam (Igor Sas) warns Orlando that the Duke will be furious and that they too should take shelter in the Forest of Arden.

Furious at the fight result, Duke Frederick banishes Rosalind from his court. She flees to the Forest with Fredrick’s daughter, and the court jester, Touchstone (Luke Hewitt). Two young women wandering in the woods is not a good idea, and so to ensure their safety, Rosalind dresses as a young man – calling herself Ganymede, whilst Celia dresses as a shepherdess and becomes Aliena.

Duke Frederick orders Oliver to find his daughter, Celia or have his lands confiscated. Meanwhile, an exhausted Orlando and his starving companion, Adam, are welcomed into the Duke Senior’s group.

Rosalind and Celia, still in disguise, also arrive in the forest and meet the rather dim shepherd, Corin (Greg McNeill) and his hapless assistant, Silvius (Nick Maclaine) who is desperate for the love of ‘rough’ Phebe (Cecelia Peters). Then Rosalind meets her dream, Orlando, wandering through the woods, he believes she is a man and tells ‘him’ of his dearest love Rosalind. Ganymede promises to cure Orlando of lovesickness by giving him love lessons.

The Duke Senior’s melancholic attendant Jaques (Steve Turner) like to bring doom to every situation, and sitting on a large log in the forest he quotes ‘All the world’s a stage, and all the men and women merely players’ i.e. life is pointless in his mind.

Deep in the forest, Touchstone has found a goat herder, Audrey (Caitlin Beresford-Ord). She is keen to be married but Touchstone is in no rush.

Will anyone be married in the end? What will become of the cruel uncle, Duke Frederick?

The inventive and inspirational director, Roger Hodgman and his talented assistant, Lawrie Cullen-Tait have brought a wonderful fresh approach to this loved play. Every member of the cast was given their 5-minutes of fame, some as musicians but most as comedians. The personalities of every single character was alive, and filled with fun with not a weak link in the large cast.

The costumes were colourful and inventive (Christina Smith assisted by India Mehta) and immediately spelled out the required personality. Jennifer Edwards costumes were perfectly crafted, with help from Lexi Hobbs and intern Jennifer Stewart. Stage manager, Peter Sutherland and his assistant Liam Murray made the scene changes practically invisible.

Recently, composer and sound designer, Ash Gibson Greig has been in great demand, but every time he pulls a wonderful score out of the air, that matches the mood perfectly. Fight co-ordinator, Andy Fraser has been around for decades, helping and advising hundreds of actors and students on the art of fighting; so it was pleasing to hear a mutter of admiration as Andy came on dressed as the bold wrestler. The fight that ensued – with James Sweeny – must be one of WA theatre’s best ever.

An old favourite, brought up to date without spoiling the Bard’s work. Highly recommended for a fun night out.