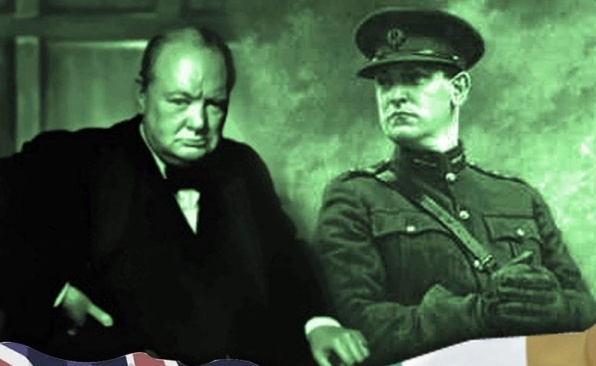 ‘Allegiance – Winston Churchill and Michael Collins’ was written in 2005 by Dublin-born, leading feminist, Mary Kenny. Ms Kenny is probably best known for her biography of wartime traitor William Joyce, who was known on the radio as Lord Haw-Haw. Her husband of 40 years was a war correspondent and sadly, he died last month.

This fabulous, two and a half hour play by Sandi Buckley’s Clover Creative Productions has its curtain up at 7.00 pm in the Irish Club Theatre, 61 Townshend Road, Subiaco each evening until Saturday 13th June.

The scene is 1921, in the office / library of Churchill’s home. The walls are lined with leather-backed books. There are a couple of comfortable chairs and a writing table. Around the walls are photographs ranging from his wife Clementine to Lawrence of Arabia. Above the proscenium arch is a Union Jack and the Irish tricolour (bratach na hÉireann). Production manager – John Spurling.

The play opens with the British Colonial Secretary, Winston Churchill (James Hagan) ranting and dictating to his secretary (Maggie Meyer), a letter ordering an Irish Rebel leader to come to England so that they may discuss a possible truce between the English controlled Ulster and Eire – the Anglo-Irish Treaty. Thankfully, Churchill’s secretary suggests modifications to this Liberal Cabinet’s member’s vitriolic letter.

On arrival at Churchill’s residence, Collins was shown into the office by Churchill’s butler, William (Kim Taylor), where he stood for a few minutes before Churchill even acknowledged his presence. Collins was about to leave in disgust, when the English politician softened and started to talk to his enemy.

Churchill spoke condescendingly to this ardent Irishman. As they discussed their hard upbringing, Churchill tells of having to drink poor wine and how he missed his Cuban cigars, Collins tried to explain the potato famine and his ancestors being forced to emigrate to America; but this was brushed off by the Liberal statesman as a minor problem. Slowly the two men appear to bond and each seeing the man behind ‘the face’.

What will win the argument? Churchill’s stubborn arrogance or Collins heartrending explanation of the situation?

Talented director and playwriting lecturer, Noel O’Neill, has been lucky enough to employ two of Perth’s best talents to act this two-hander play. James Hagan, who is WA’s leading teacher of voice, diction and drama and Irishman, Bryn Coldrick, who is a master of various genres. Bryn has made us laugh with his portrayal in ‘Black Books’, cringe with a Mafia like portrayal, and now, in this powerful drama, shows his full command of voice and body coordination in creating possibly the most powerful piece of acting that I have seen in years. Although the real Michael Collins was a tall and solidly built man, and Coldrick is finely built, he still managed to exert his authority over Churchill.

Hagan was wonderful as 47-year-old Churchill trying his best to bully Collins. He captured the politician’s speech defect immaculately. Both showed a huge range of emotions with genuine tears flowing, once in anger, then in total despondency.

Two hours of historical dialogue may sound like a nightmare to some theatregoers, but with the perfect pace, the powerful acting and the immense emotional tension, this production leaves you breathless.

Similar to the essence of this story, I saw a photograph in the paper the other day, of Gerry Adams and Prince Charles meeting. Both were smiling and seemed to be enjoying each other’s company, however, one wonders what Charles was really thinking when, in August 1979, his favourite uncle, Lord Mountbatten was killed on his boat, probably by Sinn Féin.

Inevitably a few friends or relatives will come to a show, and a few will give a ‘loyal supporters’ standing ovation, but when the WHOLE audience stand in rapturous applause then you know that you have seen something extra special.

At the Irish Club, one can always be assured of a warm welcome. A very short season with most seats gone already – try to catch it.