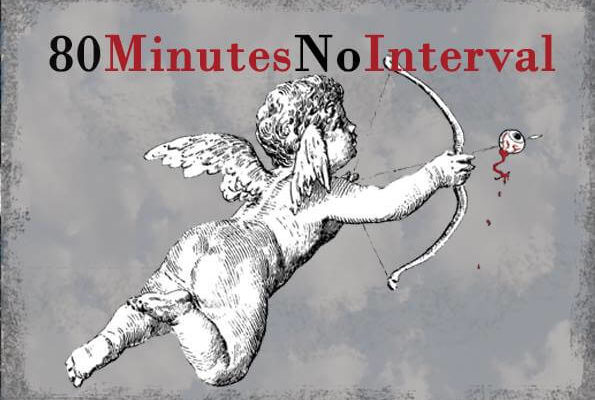 ‘80 Minutes, No Interval’ is a hilarious World Premiere by 40-year-old, WAAPA graduate, Travis Cotton. Travis has won several prestigious awards for both his scriptwriting and acting skills.

This 80-minute (not surprisingly) play is being presented by the Theatre Arts Major Students at the Hayman Theatre Upstairs, Building 102, Curtin University, Bentley.

Follow the tea light trail from the free carpark, number B13 to the theatre.

Alistair Kennedy’s set is a high-class restaurant, built on a parquet floor revolve. The walls are stretched muslin, lit with blue light – thus allowing the action behind, to be seen on occasions. The scenery being built by Alistair Kennedy, George Ashforth, Reef Jennings and Georgia Lewis. To one side sits a musician (Eleanor Davidson) playing a flute. On the other side of the stage is the dining room in Louis’s home.

In a restaurant, a nerdy, pedantic author, Louis (Kane Parker) is trying to broach the topic of marriage with his girlfriend, Claire (Lauren Beeton); however, the enthusiastic waiter (Jeremy Bunny) is determined to explain the ‘specials of the day’ to the couple. Louis has no culinary knowledge and relies on Claire to help him choose his food. It becomes obvious that Louis has not had anything published since he was at school, so he has now become a pathetic theatre reviewer.

Later that night, back at home, Louis’s father (Alex Gerrans) is exasperated by his loser-of-a-son using up valuable space and oxygen in the house, and so evicts him. Tearfully, Louis’s Mum (Kayla MacGillivray) presses a box of his belongings into her son’s arms before sending him forth.

After a tragic accident, it is decades before we catch up with Louis again. We find him shopping for flowers at Mathilde’s Florist Shop. He waits as Mathilde (Caitlin McFeat) serves a customer, a very proud mother (Ashleigh Ryan) looking for the best.

What will happen to this major failure in life? Will he ever find the perfection he seeks?

Karen Cook’s lighting design (operated by Mai Han), along with Ben Wehrheim’s sound effects (mentored by Ben Collins) brought quite a few smiles to the audience in the restaurant scene. The impressive autumn effect was the work of Phoenix Hudson and Terence Smith, supervised by stage manager Jen Scullion. The numerous props (Shannen Santos) and well thought-out costumes (Alina Sulkowski) added greatly to the atmosphere of the play.

The actors were directed by lecturer, Phil Miolin with movement choreographed by Teresa Izzard; the action flowed at a wonderful pace. The script, which was aimed at mocking the way theatre productions are chosen and how they are produced, gave the actors a chance to do asides to the audience, and subtly ham up some situations. This dry humour was very well presented, bringing numerous belly laughs.

As well as mocking reviewers, the script contained an absolutely gross but hysterical optometrist’s nightmare – so I felt quite at home.

The standard of acting was first class, not a single weak link. Special performance mention of the pathetic Louis (Kane), who was physically abused throughout the play and his partner Claire (Lauren). The unrelenting waiter (Jeremy) and Dan (Tristan) who gave the most hyper performance of the year – tremendous.

This is a most original play in so many aspects, although a brief story thread had an odd similarity to the ending of Melissa Cantwell’s ‘The Song was Wrong’. Very well written, with some weird characters.

Treat yourself to a low priced ticket, and have 80 minutes of raucous fun. Certainly worth seeing.