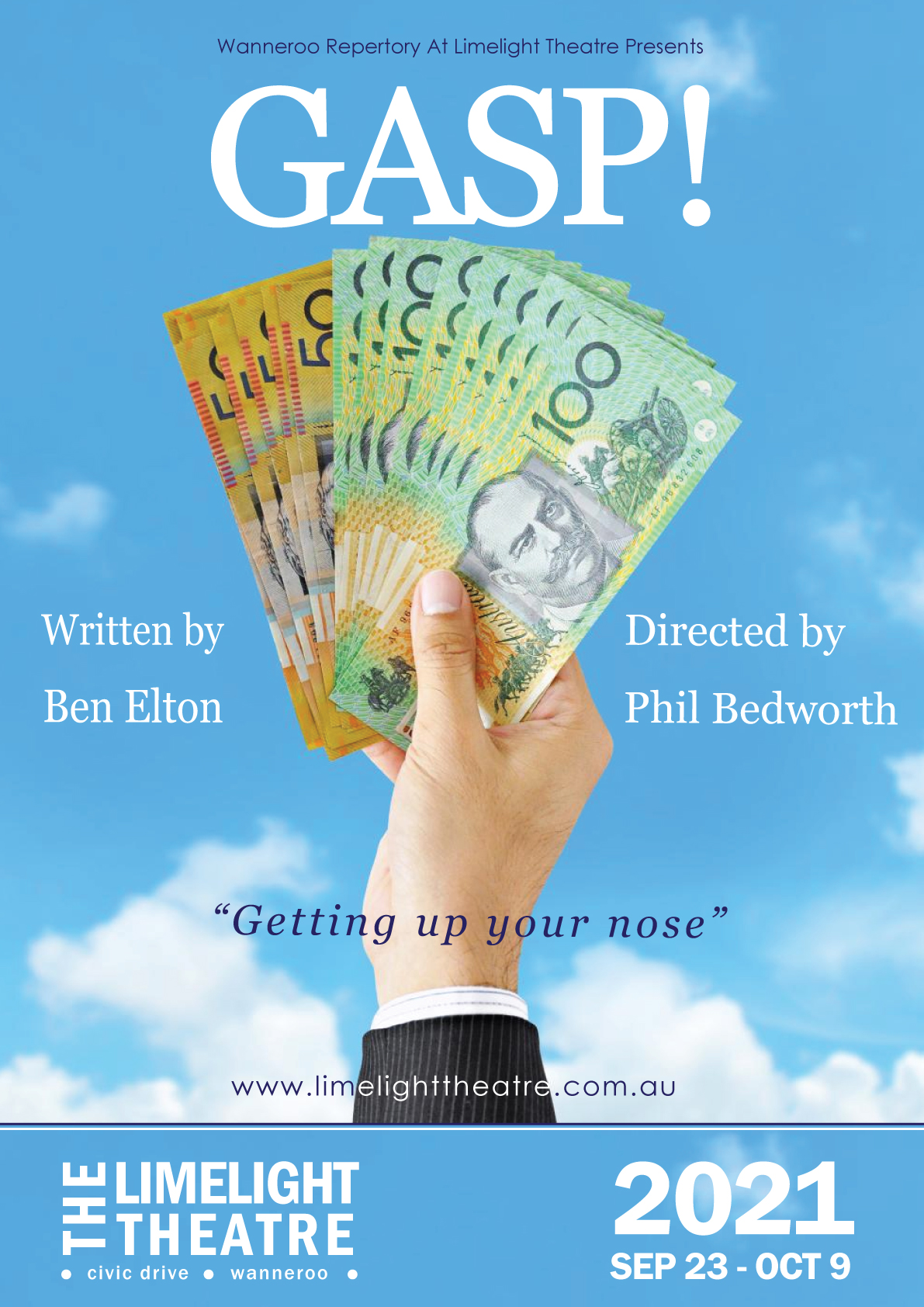 =>Imagine a world in which the air we breathe is just another commodity like food and fuel. Something that can be bought and sold according to market forces. Designer air proves to be the marketing phenomenon of the decade, but as demand outstrips supply, the world is starting to gasp, and only the biggest suckers survive.

Ben Elton’s modern adaptation on his 1991 play is a darkly comic satire on big business, the media and product exploitation.

Philip (male): Early to mid-30s, studious in appearance with an outward façade of bravado and gusto. Nothing has ever been handed to him and has pulled himself into the Executive Boardroom of Lockheart Resources with hard work and knock-backs. Will go to any lengths to please the ‘Chief’ with his loquacious nature and over exuberant body language. A conflicted soul who believes that mining is a force for good, but still has an innate belief in the good of people, and the need to reciprocate;

Peggy (female): Late 20s to early 30s. Has an understated beauty that she is completely unaware of. Has the appearance and demeanour of a librarian and seems very bookish in attitude as a result. Suffers from allergies and respiratory difficulties, but carries this burden with decorum and an unflinching attitude. Humanitarian by nature and always puts herself last in favour of her fellow humans;

Sandy (male): Late 20’s and always slightly younger than Philip, although the more senior in Lockheart Resources. Slick, good looking, great speaker with lots of charismatic charm. Has the depth of a worm’s grave and the intellect to match. Comes from a privileged background and was parachuted in to Lockheart Resources by his rich family and done as a favour to them by the ‘Chief’;

Chief (either): 40’s to 50’s larger than life, arrogant, entitled and powerful. Can dominate a room simply with their presence alone. Born in to money which has engendered an unfathomable boredom with everything in life except turning a profit, which they sees as their right and the only real challenge worth pursuing. Does not suffer fools gladly, so believes they have assembled the best team possible around themselves;

Kirsten (female): Early to mid-30s, high flying executive woman who is ultra-competitive in everything she turns her attention to. Has fought her entire career to overcome the bias against successful women in the workplace and despises misogyny of any kind. In contradiction, she is still not ashamed to utilise her gender to achieve her ends. Views men as weak and feeble, who can be easily manipulated to her own ends. Has to be top-dog in all things;

Please email gasp.limelight.2021@gmail.com to request your audition pack. We look forward to seeing you there!!